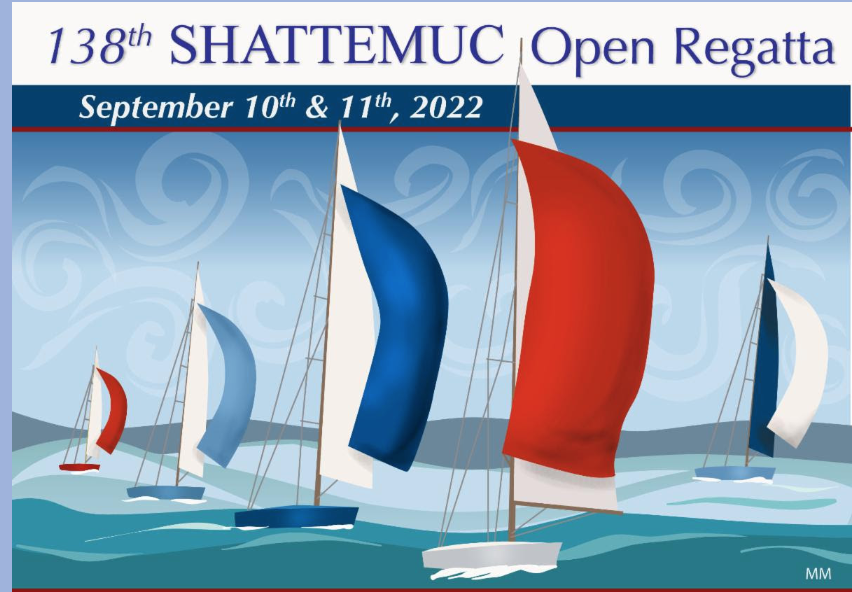 Shattemuc’s 138th Annual Open HRYRA Regatta was September 10 - 11th. As always, it was a well-run and memorable event. Shattemuc Yacht Club does not derive its name from the consistency of the composition of the river bottom, it is rather one of the names used by the first inhabitants of the area to describe what we now call the Hudson River. The Wappengi and Mateawan tribes called the Hudson by the name Shattemuc. The first Captain of the Shattemuc Canoe Club wrote in 1905 that Shattemuc means “the river that rises in the mountains and flows to the sea.” Other sources state that it means “the river that flows both ways.”  However, it got its’ name, Shattemuc Yacht Club, nestled snuggly under Croton Point, enjoys one of the prettiest views on the Hudson River. Their clubhouse also has a wonderful covered porch from which to enjoy this view. These features were greatly appreciated on Saturday of this year’s regatta. With no wind on the river and not much in the forecast, we sat and chatted on the porch as the RC boat remained in its slip.

There were seventeen boats registered for the regatta with several new boats in Fleet 3. One boat traveled from Chelsea Yacht Club to attend their first Shattemuc Regatta. Even with no wind in sight, most of the boats headed out to be on the water. Soon swimming, swinging from halyards Tarzan style, and scrubbing boat bottoms became the sports of the day. The boats that remained at their slips had their crews enjoy the gracious hospitality of SYC and went for a swim in the pool that also enjoys the spectacular view. The wait seemed endless, but after an hour and a half or so some wind fluttered in. The RC boat headed out and the fleet gathered around in anticipation of a start.

With military precision, the RC anchored and chase boats, set a start line, and a short (1.5 nm) course for all three fleets were posted. With the wind light and fluky after the start, the boats became quite spread out. For a race that took the top finishers a little more than twenty minutes to finish, the spread from first to last finishers was eleven minutes (Fleet 1), seven minutes (Fleet 2-the smallest with three boats racing), and twenty minutes (Fleet 3). The boats were so far apart that Henry Galler in Fleet 3 told me; “I thought that the three top finishers were the only boats in the fleet but there were seven.”

After the spinnaker fleets finished their first race, the wait began again as the RC decided to let Fleet 3 finish before starting the next race. Time did not improve the racing conditions as the wind on the water was starting to show holes and the velocity was hovering around 4 knots. Finally, the last boat in Fleet 3 crossed the finish line. The chase boats roared into action setting a windward/leeward course with the intention of having the spinnaker fleets do two laps and the non-spinnaker fleet do one lap around. The first windward leg was perfect (lots of time was spent making sure the start line was square to the wind and that the first mark was well positioned) and paying attention to shifts helped get you to the mark quickly. After rounding the mark, however, the wind decided to “take a snooze” as one competitor recalled. With the tide ebbing, getting to the leeward mark became more challenging, especially for the fleets starting after Fleet 1. Staying close to shore seemed to pay out most likely because of less current rather than any wind which was in short supply no matter where you were on the race course.

The RC wisely shortened the course for Fleet 1 to the windward mark on the second leg. They directed Fleets 2 and 3 to finish at the RC completing one full lap of the course. Again, the uncooperative wind left the fleets with quite a bit of distance between the first and last finishers. The exception was in Fleet 2 which had the two finishing boats correcting within three minutes of each other. Sadly one of the boats in Fleet 2 literally got the signal crossed at the leeward mark and failed to finish the shortened course. The RC did a great job under really trying conditions. The fact that any racing happened at all is a testament to how well organized and experienced the men and women of Shattemuc’s racing team are.

Working so hard to go so slow to cover so little ground was challenging, frustrating, and fun all at the same time. So what do you do next? What all good sailors do after a regatta; is gather together and spin some tales while quaffing some excellent draft beer. The after-race party was well attended (making it free to all the crew on each boat must have helped) the food was yummy and endless and the sunset was spectacular as always.

Sunday there were again two races scheduled. The RC and their well-appointed chase boats went out on time but again the wind failed to show up for this event. Everyone drifted, chatted, looked in vain for some semblance of a ripple on the water, and waited. More swimming and boat cleaning with reports of never previously seen green sheets of “kudzu” like substances growing on people’s boat bottoms. Perhaps the lack of rain and greater salinity levels in the river had something to do with it?  A local diver who cleans boats for a living reported seeing a bull shark recently while cleaning a boat at Shattemuc. I’m sure people will be happy that they did not know this while in the water last weekend!

After an hour and a half or so of hoping the wind would join us for some fun on the water, the morning was becoming afternoon. The RC abandoned the races for the day. Everyone "raced“ back to the docks for some more food and drink and to cap off the regatta with the awards. Shattemuc’s Regatta and Racing Chairperson Vicki Arbitrio started the proceedings with a tasteful moment of silence for the victims of the 9/11 terrorist attack before the trophies were handed out. She also had a long list of people to thank for all their help in organizing and running the regatta. I witnessed the beehive of activity (while waiting on the aforementioned porch) and it was mind-boggling how much effort was put into preparing and running this most successful event.